What is a Parish Mission?

Parish missions began in the eighteenth century. Saint Alphonsus Liguori, a priest of the Diocese of Naples, made significant contributions to the development of parish missions.
The purpose of a parish mission is to enable the faithful to come to a deeper understanding of one’s faith and the purpose of your existence within the parish community and the purpose of the parish existence.
A parish mission allows you to take some time to look at your life, values, and direction. It encourages you to ask: “What is really important to me? What am I doing with my life? What values do I have? Where does God fit into my life? What does my faith, my Church, mean to me?”
At St Joseph’s, we had chosen to use a team of people from the Religious Family of the Institute of the Incarnate Word, a religious congregation that has several branches to it. We were blessed by having a priest, deacons, seminarians, novices and sisters leading us in our mission.

Our Mission Preacher was Fr Ernesto Caparros IVE.               Fr Ernesto is the Provincial of the Order covering Italy, Greece and Albania.

We also had 2 newly ordained deacons, Nicolas and Stephen join the Mission team, both from Dublin in Ireland, along with 3 senior seminarians Br Simon from Stirling,Br Keir from Brechin, Br Sean was from Galway, Ireland and also taking part in giving the Mission was 2 novices, Gerard and Dominic, both of whom were local lads from Stirling.

The Sisters were from the Servants of the Lord and the Virgin of Matara and were very easily spotted in their distinct habits of blue and gray around the parish. We welcomed 4 sisters, Sr Koluse from Australia, Sr Castissima from the Netherlands, Sr Mater Vitae from the USA and Sr Lucila from Argentina. 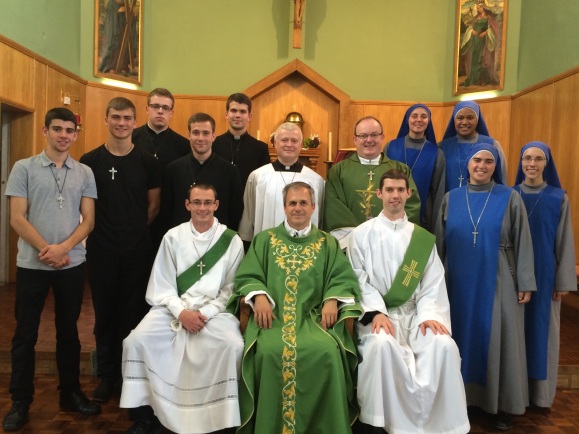 From Friday 22nd August until Sunday 31st August there was a Mission talk taking place each evening in the church at 7pm, except on the Saturdays when it was held during the vigil Mass.

On Sunday 24th after the 11am Mass we held a family barbeque and fun day.  This was a great success with more food having to be hastily bought in.  Face painting was carried out on the lawn and games and activities for the kids were led by the missionaries.

On Tuesday 26th August we held exposition of the Blessed Sacrament from after 9.30am Mass until the Mission talk in the evening.  This gave a longer period of time spent in prayer before our Blessed Lord for the fruits of the mission.

On Thursday 28th at 4pm there was a football competition, between the seminarians and several parish teams, made up of altar servers, primary school pupils and teenagers.  All three teams were gubbed by the seminarians!  This was followed by pizzas for the youth and then a youth talk.

On Friday the  seminarians played against two teams of staff members of St Mungo’s High School in Falkirk, no guesses for who won!  At 5pm on the Friday we gathered at the Hills of Dunipace for a short prayer service and the blessing of family graves, before the evening talk which was followed by  a family ceilidh.

On the Saturday afternoon, the Missionaries had some time off after all the hard work and on the Sunday, the last day of the Mission, Deacon Stephen carried out his first baptism, which took place during the 11am Mass. In the evening the Mission was formally closed and the blessing of the Parish Mission Cross, a reminder of our Popular Mission took place.

We thank the members of the mission team for their hard work and prayerful presence amongst us, and a special thanks must also go to the parishioners who gave a hand with the various catering, hospitality and generous spirit.

May the Lord continue to bless us all.