Today’s Feast – The Nativity of St John the Baptist

Posted on June 24, 2015 by stjosephbonnybridge 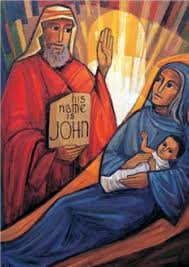 Jesus called John the greatest of all those who had preceded him: “I tell you, among those born of women, no one is greater than John….” But John would have agreed completely with what Jesus added: “[Y]et the least in the kingdom of God is greater than he” (Luke 7:28).

John spent his time in the desert, an ascetic. He began to announce the coming of the Kingdom, and to call everyone to a fundamental reformation of life.

His purpose was to prepare the way for Jesus. His Baptism, he said, was for repentance. But One would come who would baptize with the Holy Spirit and fire. John is not worthy even to carry his sandals. His attitude toward Jesus was: “He must increase; I must decrease” (John 3:30).

John was humbled to find among the crowd of sinners who came to be baptized the one whom he already knew to be the Messiah. “I need to be baptized by you” (Matthew 3:14b). But Jesus insisted, “Allow it now, for thus it is fitting for us to fulfill all righteousness” (Matthew 3:15b). Jesus, true and humble human as well as eternal God, was eager to do what was required of any good Jew. John thus publicly entered the community of those awaiting the Messiah. But making himself part of that community, he made it truly messianic.

The greatness of John, his pivotal place in the history of salvation, is seen in the great emphasis Luke gives to the announcement of his birth and the event itself—both made prominently parallel to the same occurrences in the life of Jesus. John attracted countless people (“all Judea”) to the banks of the Jordan, and it occurred to some people that he might be the Messiah. But he constantly deferred to Jesus, even to sending away some of his followers to become the first disciples of Jesus.

Perhaps John’s idea of the coming of the Kingdom of God was not being perfectly fulfilled in the public ministry of Jesus. For whatever reason, he sent his disciples (when he was in prison) to ask Jesus if he was the Messiah. Jesus’ answer showed that the Messiah was to be a figure like that of the Suffering Servant in Isaiah (chapters 49 through 53). John himself would share in the pattern of messianic suffering, losing his life to the revenge of Herodias.

John challenges us Christians to the fundamental attitude of Christianity—total dependence on the Father, in Christ. Except for the Mother of God, no one had a higher function in the unfolding of salvation. Yet the least in the kingdom, Jesus said, is greater than he, for the pure gift that the Father gives. The attractiveness as well as the austerity of John, his fierce courage in denouncing evil—all stem from his fundamental and total placing of his life within the will of God.