Posted on June 3, 2015 by stjosephbonnybridge 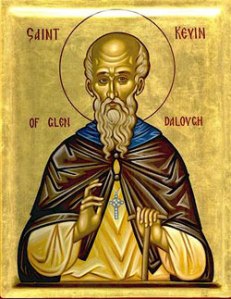 Known in Ireland as Coemgen as well as Kevin, according to tradition he was born at the Fort of the White Fountain in Leinster, Ireland, of royal descent. He was baptized by St. Cronan and educated by St. Petroc. He was ordained, and became a hermit at the Valley of the Two Lakes in Glendalough. After seven years there, he was persuaded to give up his solitary life. He went to Disert-Coemgen, where he founded a monastery for the disciples he attracted, and later moved to Glendalough. He made a pilgrimage to Rome, bringing back many relics for his permanent foundation at Glendalough. He was a friend of St. Kieran of Clonmacnois, and was entrusted with the raising of the son of King Colman of Ui Faelain, by the king. Many extravagant miracles were attributed to Kevin, and he was reputed to be 120 years old at his death. His feast day is June 3rd.