Posted on May 1, 2015 by stjosephbonnybridge 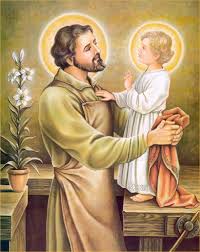 From the Acts of Pope Pius XII
The Church, most provident Mother of All, expends the greatest efforts for the protection and relief of the workers, erecting and promoting for them societies which Pius XII, the Supreme Pontiff, now wishes to be entrusted to the most powerful patronage of St. Joseph. For St. Joseph, since he was reckoned the father of Christ, who deigned to be called the son of a workman, on account of the irrevocable bond which united him to Jesus, drank abundantly of that spirit which ennobles and elevates labor. In like manner, associations of workers ought to be aware of the same kind of spirit, so that Christ may always be present in them, in their members, in their families and in fact in every labor organization, because the chief purpose of these associations is to foster and nourish the Christian life in their members, to spread the Kingdom of God more widely, especially among fellow workers in the same plant.

The same Pontiff supplied a new proof of the Church’s solicitude for labor organization, when, upon the occasion of a convention of workingmen held in Rome on the first of May in the year 1955, he took the opportunity of speaking to a large multitude gathered in the square before St. Peter’s Basilica, and commended most highly the instruction of workingmen. For in our day it is of prime importance that the workers be properly imbued with Christian doctrine in order that they may avoid the widespread errors concerning the nature of society and economic matters. Moreover, such instruction is needed that they might have a correct knowledge of the moral order established by God as it effects the rights and duties of workers, and which the Church discloses and interprets, so that by partaking in the needed reforms they might work more effectively toward their realization. For Christ was the first one to promulgate in the world those principles which he delivered to the Church and which still stand unchangeable and most valid for the solution of these problems.

In order that the dignity of human labor and the principles which underlie it might penetrate more deeply into souls, Pius XII has instituted the feast of St. Joseph the Workman, as an example and a protection for all associations of workers. For from this example, those who follow the worker’s calling ought to learn how and in what spirit they should discharge their duties, so that, obeying the first law of God, they might likewise subdue the earth and attain to economic prosperity, and at the same time reap the rewards of eternal life. Nor will the prudent guardian of the Family of Nazareth fail to shield with his protection, and from heaven bless the homes of those who, like him, are artisans and workmen. Most aptly has the Supreme Pontiff ordered this feast to be celebrated on the first of May, a day which the workers have adopted as their own; from henceforth let it be hoped that this day, dedicated to St. Joseph the Workman, will, as time goes on, not sharpen hatred and inflame strife, but with each recurring year, invite everyone to strive more and more for those things which are still lacking to civil peace, and indeed that it may stimulate the public authorities to use their abilities in effecting whatever right order demands of human fellowship.

Matthew 13:54-58
And at that time: When Jesus had come to his own country, he began to teach them in their synagogues, so that they were astonished, and said: “How did this man come by this wisdom and these miracles? Is this not the carpenter’s son?” And so on.

Homily by St. Albert the Great, Bishop
On the Gospel of Luke, Ch. 4
On the Sabbath day he entered the synagogue, where those who came to listen had gathered. And the eyes of everyone in the synagogue were intent upon him. Some indeed with devotion, some out of curiosity, while some watched him that they might trap him in his talk. And the Scribes and Pharisees said to the people, in whom faith and devotion had already made a beginning: “Is not this the son of Joseph?” See this attitude of disparagement toward him whom they did not even deign to call by his name. “The son of Joseph,” this little the Evangelist says because he had known that both in Mark and in Matthew a fuller statement would be made: “Is not this the carpenter’s son? Is he not a workman, the son of Mary?” All these things were said contemptuously.

Joseph is said to have been a carpenter who earned his living by his skill and the work of his hands, and he did not eat his bread in idleness and indulgence, like the Scribes and Pharisees. Mary also worked for her living with her husband, and with competent hands. And here is the meaning of what they said about him: “This man of ignoble and poverty-stricken birth could not be Christ the Lord, whom God anointed. And thus no credence is to be given to such an uncultivated and low-born man.”

Now the Lord was a workman because the prophet said of him: “You fashioned the moon and the sun.” A similar contemptuous way of speaking is found in the Book of Kings, where they said of Saul when he became king: “What is this that has happened to the son of Cis? Is Saul also among the prophets?” This slight remark shows great disparagement. For the Lord says: “Amen I say to you, that no prophet is acceptable in his own country.” Here the Lord calls himself a prophet. For he, to whom all things are known through his divinity, receives no revelation of inspiration from outside himself. Here, however, he definitely calls the place of his birth and upbringing his own country. But he was not acceptable to his fellow townsmen who were incited against him by envy.

Let us pray.
God, Creator of all things, who didst lay on the human race the law of labour: graciously grant; that by following the example of Saint Joseph and under his patronage, we may carry out the work thou dost command, and obtain the reward thou dost promise.
Amen.