The Sixth Word – “It is finished.”

Posted on April 2, 2015 by stjosephbonnybridge 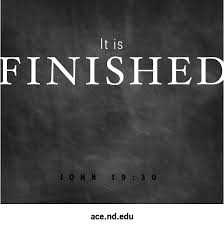 “It is finished.” To what was Jesus referring? His Passion? His crucifixion? His work here on earth? It was probably all those things and more. He had done everything humanly possible for the salvation of the world. He never wrote a word, except for a few scribbles in the dirt. He showed the proud they had nothing to be proud about. He showed the poor they were still loved. He lived the spirit of the law of God, not the humanness of the law. He convinced quite a few people He was special. He convinced many of His closest followers He was sent from God. However, most of the most convinced people in His entourage left Him when it counted the most. They were not yet ready to give up their lives for Him. Only one thing would lead them to a higher faith, and that had nothing to do with humanity. Jesus had finished everything that was humanly possible. Now it was time to do what was only divinely possible.