Posted on September 20, 2014 by stjosephbonnybridge 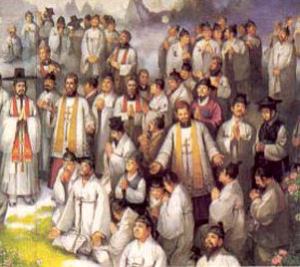 For centuries, Korea was closed to all outside influences, and all contact with foreigners was forbidden. No missionaries went there. Nevertheless, a number of laymen sought to find out all that they could about the outside world, through the annual embassy to Peking. Some books about Christianity fell into their hands, and they were converted. Because of the secrecy involved, it is impossible to date the origin of Christianity in Korea with any precision: it may have started in the early 17th century, but the first known baptism is that of Ni-Seoung-Houn, who was baptized under the name of Peter when he visited Peking in 1784.

The first known martyrs are Paul Youn and James Kouen, who in 1791 refused to offer sacrifice on the death of their relatives. Over the next century, over ten thousand Korean Christians were executed, with great cruelty; and many others perished.
For most of this period, the church in Korea had no priests and was an entirely lay phenomenon. The first priest, a Frenchman, entered the country in 1836 and was beheaded three years later. Andrew Kim Taegǒn, the first Korean priest, secretly trained in Macao, entered Korea in 1845 and was executed in 1846, together with his father. A lay apostle, St Paul Chong Hasang, and many others perished at the same time. A further major persecution occurred in 1866.

In all, 103 of the Korean martyrs are celebrated today: they are mostly lay men and women: some married, some not; some old, some young, some even children.
“The Korean Church is unique because it was founded entirely by laypeople. This fledgling Church, so young and yet so strong in faith, withstood wave after wave of fierce persecution. Thus, in less than a century, it could boast of 10,000 martyrs. The death of these many martyrs became the leaven of the Church and led to today’s splendid flowering of the Church in Korea. Even today their undying spirit sustains the Christians of the Church of Silence in the north of this tragically divided land.” – Pope John Paul II at the canonisation of the Korean Martyrs, May 6th, 1984.