Posted on August 18, 2014 by stjosephbonnybridge 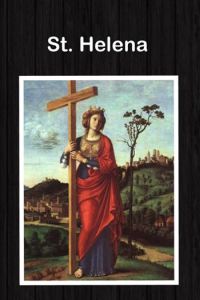 Empress mother of St Constantine the Great. She was a native of Bithynia, who married the then Roman general Constantius I Chlorus about 270. Constantine was born soon after, and in 293, Constantius was made Caesar, or junior emperor. He divorced Helena to marry co Emperor Maximian’s stepdaughter. Constantine became emperor in 312 after the fateful victory at Milvian Bridge, and Helena was named Augusta, or empress. She converted to Christianity and performed many acts of charity, including building churches in Rome and in the Holy Land. On a pilgrimage to the Holy Land, Helena discovered the True Cross. She is believed to have died in Nicomedia.  St Helen was the patron of the pre-reformation Catholic Church that was to be found in Bonnybridge, and today we have our Oratory dedicated to her honour.